It is possible to analyse synthetics misties of the wells in the Synthetics Analysis Table.

This feature allows you to analyse the misties between the well synthetics and seismic synthetics in a table that displays attributes including Correlation Coefficient, Misfit, SNR, Shift, Phase, and Scale. The time range which the values are measured over is displayed in the table under the TWT Range column. You can adjust the time range by changing the default window of interest or specifying a window of interest for a particular well (see Default Window Of Interest and Overriding the Window of Interest). 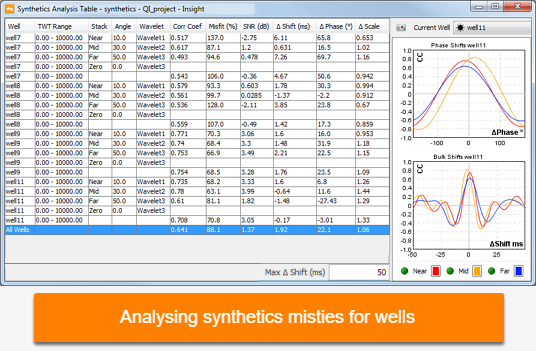 At the bottom of the Synthetics Analysis Table, set the maximum shift to be displayed.

Misfit is defined as:

SNR is defined as:

Δ Shift (ms) is calculated as:

These graphs show the correlation between the synthetic and seismic as different phase and time shifts are applied.

Figure 1 shows an example of a wavelet extracted from a perfectly matched seismic to synthetic trace. The wavelet has 0 lag and 0 phase shift.

The table shows near zero delta time and phase. The graph shows a peak of time and phase centered at zero and a symmetrical graph.

Figure 2 shows the effect of wrongly introducing a 5 ms shift to the wavelet. Graph shows a 60 degree phase shift to optimise tie when a 5 ms time shift is introduced.

Figure 3 shows that when the timing is wrong, compensating the 60 degree phase shift in the wavelet can wrongly compensate the graph and is shown through the table. In addition, it will also show up in the time shift correlation graph as an asymmetrical shape.