The concept of the centroid was described by Traugott (1997), and has also been referred to as “lateral pressure transfer” (Yardley and Swarbrick, 2001). The concept assumes that there is a midpoint or centre-point (the centroid) along a dipping sequence of permeable reservoirs and sealing non-reservoirs where the pore pressure in both is the same (pressure equilibrium). At this point, the predicted pore pressure (in the sealing non-reservoir) is assumed to be equal to the measured pore pressure in the porous reservoir.

In a hydraulically-connected formation, deeper overpressured areas are connected to shallower areas by a permeable layer. As a result, fluid flow along such a pathway can cause pressures to increase at the crest of structure – a common drilling target.

The relationship between predicted and measured pore pressure can be complicated, and an understanding of the relevant geological factors involved (compaction disequilibrium, seal breach, geologic and structural setting, etc.) is important. The measured pore pressure in the reservoir will usually follow the hydrostatic gradient of the formation fluid. The pressure in a hydraulically-connected formation can be calculated based on the difference in the heights of the fluid columns.

The centroid method can be used to predict the pore pressure in a porous reservoir (or hydraulically-connected formation) using formation fluid density and fluid column height, and can be calibrated to measured formation pressures in the well bore.

In the Centroid tab, add one or more fluids. Then in the View tab, toggle on each of the respective fluids to display. Figure 23(a) shows this initial setup.

The predicted pore pressure should correlate with borehole measured pressures, such as MDT or RFT measurements (see Calibration Points). The height of a hydrocarbon column may then be interpreted and its effects on pore pressure predicted. Figure 23(b) shows how the fluid heights and densities can be edited in order to estimate the maximum pore pressure expected up-dip in a reservoir layer. 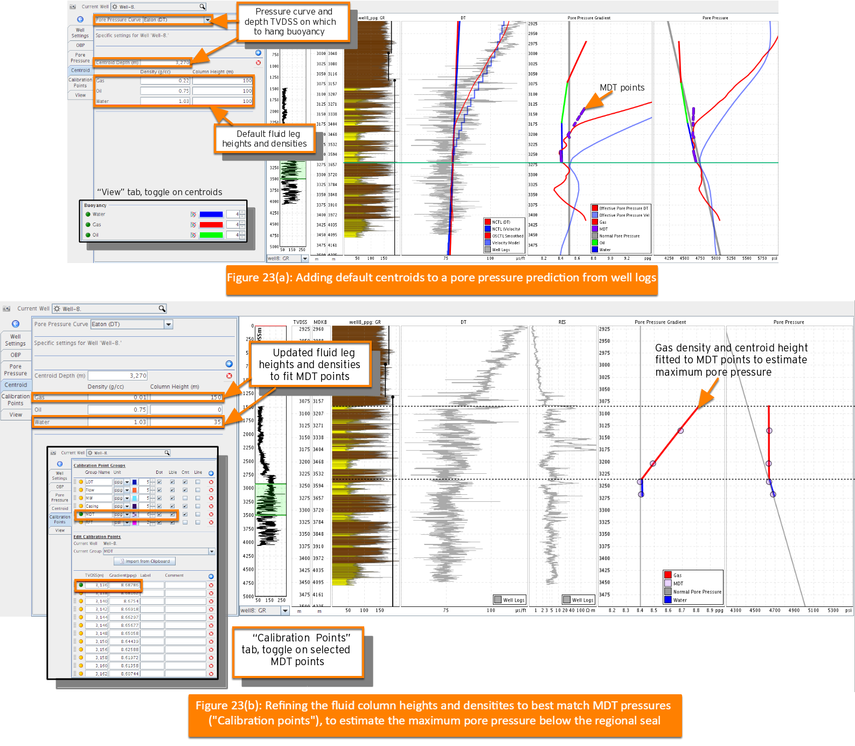